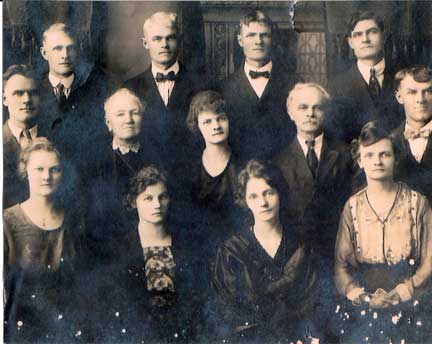 According to the Dictionary of American Family Names, “Misfeldt is a North German topographic name for someone who lived by a swampy area of open country, from a Middle Low German word for ‘swamp’ + velt ‘open country’.”  We’ve interpreted it slightly different, believing ‘feldt’ to mean field, and thus “fertile fields” since farming has been a big part of our family’s heritage.

This website was started for that branch of the Misfeldt family that originally settled in the Jim Falls area of Wisconsin when Margaret and her husband, Ernest Friedrich Misfeldt, emigrated to the United States from Surendorf in the Schleswig-Holstein region of Germany in 1878 with their three oldest children, Christian, Henry, and Christina. They sailed from the port of Rendsburg that September, according to passenger lists. Ernst was born on February 26, 1849.

His father, according to public records, was Christian Detlef Missfeldt (born February 23, 1818, in Surendorf, Germany). Margaret’s maiden name was Lensch or Lentsch and her first name also shows up in various forms, including Margaretha. During the 2020 COVID-19 pandemic, considerable work has been done updating the family tree on Ancestry.

The website will be more than just listing of birth dates, weddings, children, and deaths.  It is intended to tell some of the family-related stories.  Some family links may not have much information, which is due to their desire for privacy, which we respect and have password-protected, or the family information is unknown, incomplete, or still being researched.

The region of Germany were Ernst was born was primarily Lutheran in religious mindset, following Martin Luther’s teachings on Christianity. John was born in 1879, the first of Ernest and Margaret’s 11 children to be born in the United States. This was also the time of Otto Von Bismarck’s expansion of the Prussian Empire in the 1860s, which may have precipitated the emigration to this country. Ernst dropped the second “s” in Missfeldt between the census of 1900 and 1910. He became a farmer in Eagle Point township in Chippewa County, Wisconsin, and also worked in the lumber industry at a mill and as a top loader. He died June 24, 1931.

Ernest and Margaret’s children ranged in age from their first-born, Christian, in 1873 until their baby, daughter Ida, came along in 1896. The navigation bar above shows their children in birth order, with links to what information we have been able to gather on each of the children, thanks primarily to Jim Misfeldt, grandson of Charles Amile Misfeldt.

We are trying to reconnect to a family website with a wealth of information about the Misfeldt family lineage dating back to Jochim Misfeldt around 1550. It is one of those pivotal pieces of the puzzle we are trying to piece together for future generations. We will again share the link when we reach Horst Missfeldt! 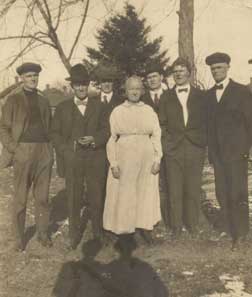 Margaret “Maggie” Misfeldt (nee Lentsch) is shown at left with her six sons, (from left to right): Fred, Chris, Henry, Maggie, Will, Charley, and John.

We’re not sure who the people are in the shadows, but it doesn’t look like either of them were taking the photograph. We hope the mystery will be solved some day. It could be two of the brothers’ five sisters, or spouses.

Now that we have switched to WordPress and a new hosting service in 2015, we should be making regular updates to the site again. If you have information about the Misfeldt or Missfeldt family, including old (or new) photographs, you would like to share, please forward that stuff to Terry Misfeldt via E-mail at PackingSteel@gmail.com.  Just put Misfeldt Family in the subject line and we’ll get to it.

No, the E-mail address doesn’t mean Terry packs a firearm. It means he has been a lifelong fan of the Green Bay Packers and a fan of the Pittsburgh Steelers since the early 1970s.