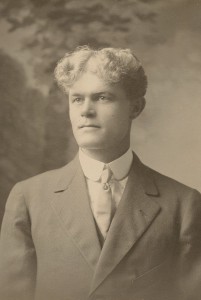 John Regard Misfeldt was the fourth child and third son of Ernest and Margaret Missfeldt.  He was the first of their 11 children to be born in the United States after they moved from Germany to north central Wisconsin.  John Regard was born January 26, 1879, at Jim Falls in Chippewa County, Wisconsin.

On September 12, 1912, he married Mabel Lena Hubbard at Red Cedar, Wisconsin.  It is believed they moved to their farm south of Thorp in 1919, which they affectionately named Breezy Hill.

John and Mabel had four sons:

John Regard (cneter) with sons, left to right, Galen, Loren, Clyde, and Roland